FUJAIRAH, UAE (Nov. 25, 2018) -The final of the Men’s -68kg category at the recent 2018 Grand Prix Final in Fujairah, would prove to be an extraordinary match. Not because it was fought between two Koreans – Team Korea was on a roll at the end of the fighting season, and it is not unusual for team members to face off against each other – but because of the points that were scored.

It pitted superstar Dae-hoon Lee versus Seok-bae Kim. Round 1 saw Lee go to work and deliver a stern lesson to his junior team mate, leading the board with a massive point gap. In the second, Lee – ambidextrous, inexhaustible, flexible – was 31-8 up. In the third, Lee’s high round kick and jump spinning back kick drew gasps from the crowd: The man is the closest thing taekwondo has to a kicking machine. A desperate Kim even tried an arcing, dive kick, but though he racked up an impressive 20 points, Lee’s score was 65 – the kind of points more common in basketball than taekwondo.

The same evening, at the National Theater, Lee won yet another honor: WT’s “Male Player of the Year” Award.

In short, Lee is the most dominant player in the game and the most admired among his peers. Why is he so good? 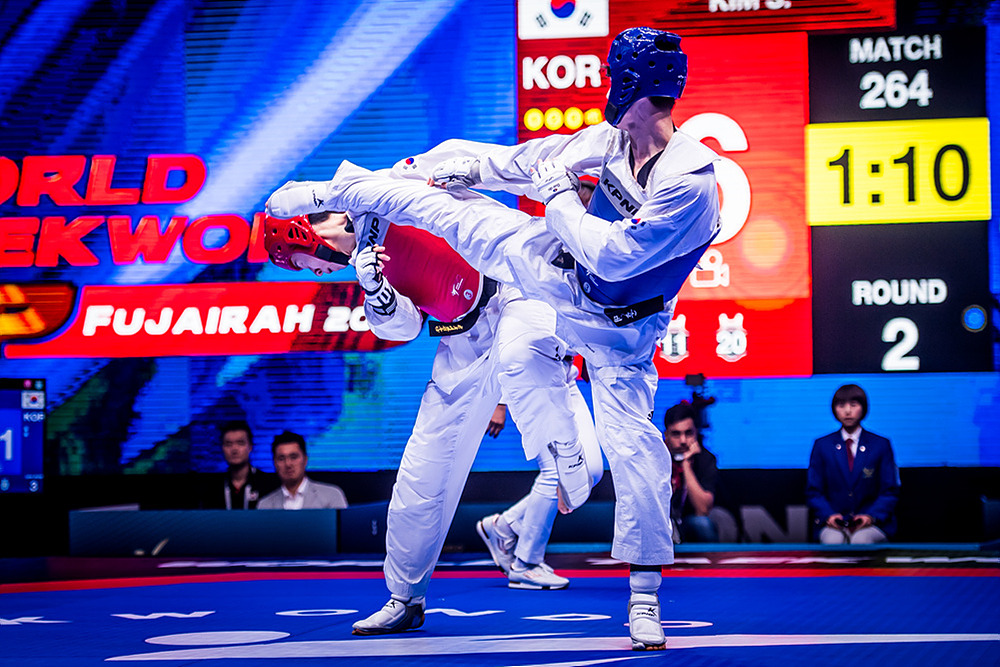 Longevity and genetics are two reasons for he was born into the game: He started taekwondo at his father’s dojang as a toddler. “When I was five, I started learning taekwondo,” he said. “Through growing up, with taekwondo, I love taekwondo.”

But while Lee is a heavy hitter on the mats, off them he is soft spoken and self-effacing. Asked the secret to his sportive excellence, he says, simply, “I train hard and I think a lot.”

According to persons familiar with the game, those are understatements.

“When he was studying at Yongin University, he was playing at -58kg and he would do four training sessions a day, then he would go running at night to lose weight,” said WT TV Commentator John Cullen. “He ran so much, that he has this amazing heart and lung capacity.”

Today, though he is still as lean as a whip, Lee is powerful with it. And in the new game – pushing has been allowed since 2017 – upper body strength is a bonus. “He is physically strong,” said Cullen. “Nobody outwrestles him in the clinch.” 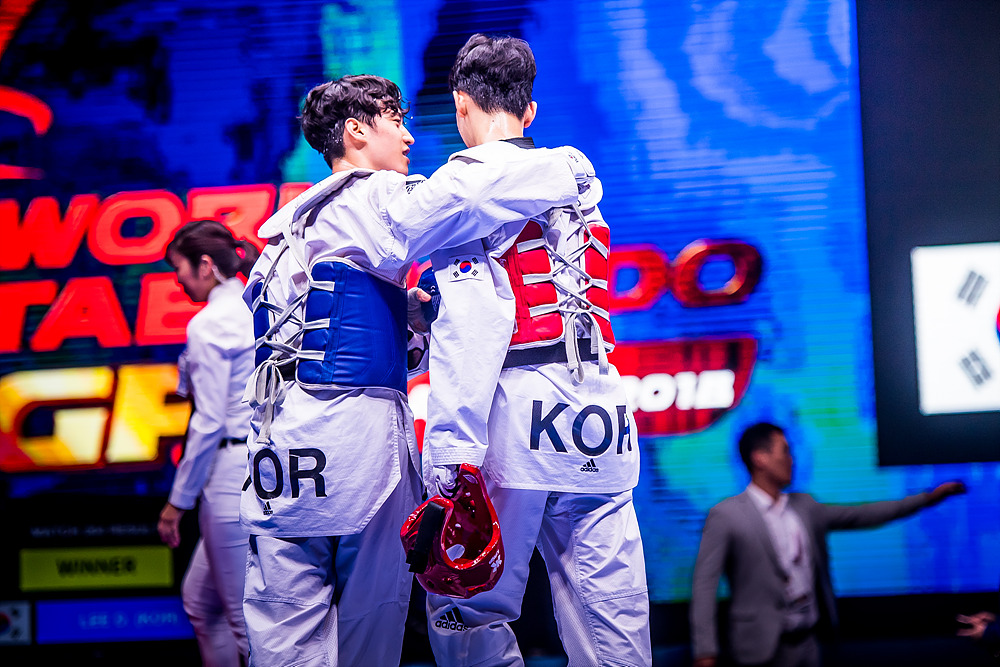 Lee now boasts the kind of cardio capacity even other Olympic-grade taekwondo fighters lack. “In Wuxi, he was the only one who could stay at the same level over five rounds,” said WT Education Committee Chairman Philippe Bouedo – a reference to the five-, rather than three-round, format that was trialed at last year’s Grand Slam series in Wuxi, China.

Backing up his weapons-grade aerobic system is Lee’s fighting efficiency. “He never kiaps – I have never heard him kiap,” said Cullen.

The kiap is the yell martial arts fighters originally employed to focus their technique. Though audibly impressive, it takes a lot of breath and in modern taekwondo, many fighters kiap to demonstrate their fortitude, or to signal a point. Lee has no need to do either.

All this makes Lee a dangerous combination of natural talent and super-trainer. Lee himself admits that if was not a taekwondo player, he could never be an office worker. “I’d be an athlete,” he said. “I’d do baseball, ping pong or soccer.”

Yet his talent extends beyond heart, lung and muscle to eyes and brain. In 2017, collecting his Male Player of the Year award, he said, in English, “I learn so much from watching you guys.”

He was not just being kind to his peers: Lee is one of the best-prepared fighters on the mats. “I analyze a lot,” he said. “I don’t just watch my opponents, I watch fighters from all divisions, all the good players – even the women. “

“He really studies his opponents,” added Bouedo. “He fights differently according to the player.” 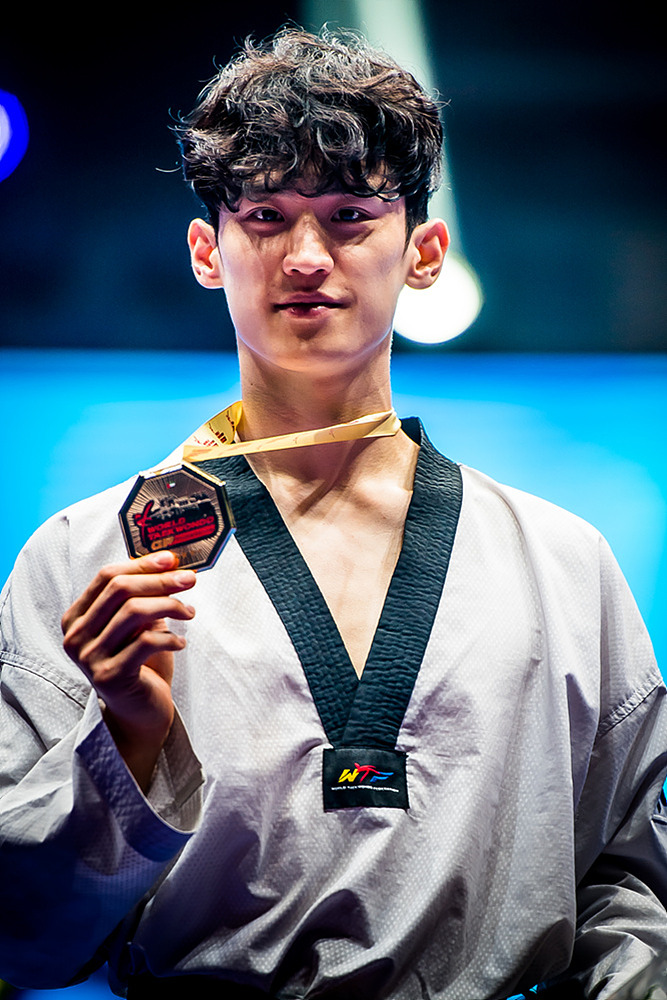 His kicks are not just hard; they are as accurate at heat-seeking missiles. “His ratio of kicks to points is like a machine – it’s like another member of Team Korea has a remote control!” said Bouedo. “Bam-bam-bam – unique!”

The reason Lee is such a high scorer, according to WT Commentator Cullen, is his no-fear approach to distance management. “The reason he is so accurate is that he stands at danger-distance,” the WT commentator said.

“He’s a killer!” added Cullen. “He looks so quiet and kind – but he is a baby-faced assassin.”

“I enjoy watching his fights, He does everything he wants to do on the court,” said Mahdi “The Terminator” Khodabahshki, the master fighter Team Iran rolls out when it needs a last-second win. “He is a legend in taekwondo.”

“He is the best fighter I have ever seen: When he does taekwondo, he is playing – it is a game for him!” added Haby Niara, Team France’s Rio silver medalist. “I am jealous!”

So what is left in the game for this “baby-faced assassin?”

“I enjoy taekwondo; I think that’s important,” Lee said. “I have got everything except Olympic gold, but I would do anything for a happy life.”